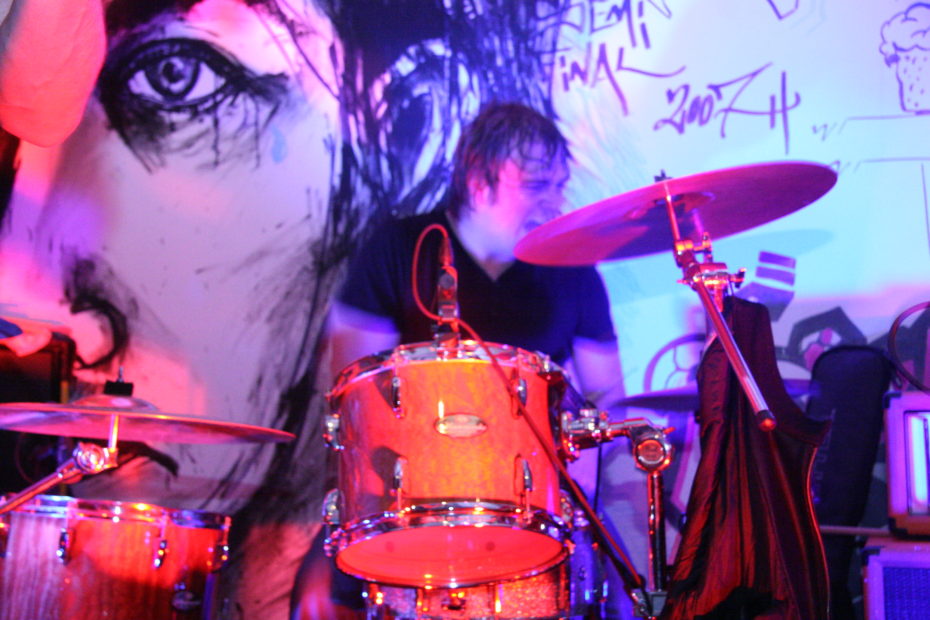 Roger started playing drumkit/percussion at the age of five and has been a working musician for over 25 years.

In 1996, after a short European tour with a band he formed at college, he was asked to play with London based band “Sugarush” signed to a small independent label (Mutiny Records).

This led to more work as a session musician and a job working at London’s largest rehearsal studio “The Depot”, as a drum-tech and runner for many bands including; Blur, Oasis, Elastica, Primal Scream, The Prodigy, Jimmy Page & Robert Plant, The Bluetones, Kula-Shaker, Dodgy, Supergrass, Ash, The Verve, The Longpigs, Finlay Quaye, Pulp, The Beta Band, The Manic Street Preachers, Kylie Minogue, Faithless, Jamiroquai to name but a few.

He played with the “Downtown Superpunks” gigging far and wide including a support slot for Muse in 1997.

In 1998 he was the drummer with the band  “Hawaii” (supporting the legendry Silver Apples), and between 1999-2007 he played with London Bands, “Sonar”, “Velvetone” (on the Sony Label), “Coachella” (Chrysalis), “Portmoon” (Formerly “Catchers” on the Setanta Label), and played with Exeter based band “State of Fury” who gigged heavily Nationwide with numerous recording sessions at Malcolm Tofts “Trident West Studio”, and Jethro Tull guitarist Martin Barre’s “Press House Studio” .

In 2007 he played Bass, percussion and keybords for “rairbirds” (one little Indian label) , and drums for Cornish based rock outfit Leadcherry which included supporting “Reef” Singer Gary Stringers side project “Them Is Me”.

During 2009/2010 he played with The Underbelly, releasing an album “7 Feet Under” on the record-kicks label, with a subsequent tour of Italy in 2010 supporting legendry James Brown backing vocalist Martha High and the Shaolin Temple Defenders. This was followed by sell out shows including a sold out Eden session, several big festivals including Glastonbury 2010 and a live performance on Craig Charles’s BBC Radio 6 “Funk and Soul Show”

Taken from the Album 7 Feet Under:

In 2011 he completed an album with his band “The Raise” with Rob Elton from Rootjoose/Rairbirds and spent a couple of years gigging and recording.

In 2017 Roger played drums and percussion on Sarah McQuaids seventh solo studio album “If we dig much deeper it could get dangerous”.

In 2019 Roger was drummer/percussionist and vocalist for Kneehigh theatre composer Jim Carey’s  “Riots and Lobsters” band, touring Nationwide as one of the Saboteurs..

At the end of 2019 and the beginning of 2020, Roger started recording drum parts for a new album by ‘Catchers’. The release date, and also upcoming European tour have, for now, been postponed due to the current Covid 19 crisis.

After a sell-out Album launch at the Kneehigh ‘Asylum’ venue with Louis King’s ‘Rat Affair’, and succesful tour in early 2020 all live projects have had to be put on hold.

Roger has therefore, taken to the studio and is currently recording drums remotely for various projects.

Roger has over 25 years worth of experience as a session player. As well as drums, he plays bass / guitar / keyboards / vocals and percussion.